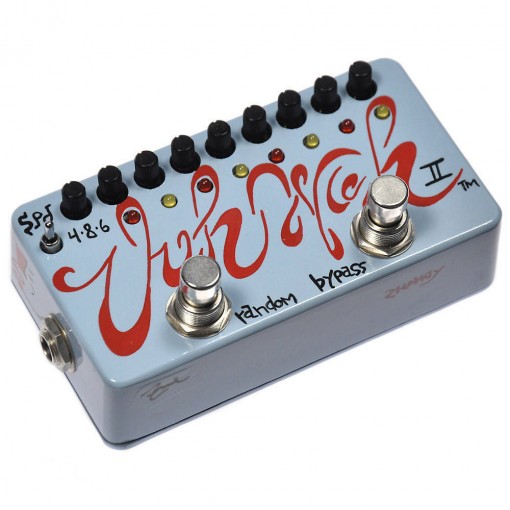 This improved version holds at step #1 when in bypass mode, and starts intime when turned on. Zvex makes another pedal called a seek-wah, but this new one does everything that one does and more. It has a random/seek stomp switch that lets you jump between the seek-wah sound and this new random mode, which sounds a little like random sample-and-hold driving a bandpass filter. If you don't know what that is... listen to Frank Zappa's "Ship Ahoy" as an example.

We know it may be confusing, but just relax and let the ooh-wah guideyour tempo. When you turn iton, it will probably be playing a pattern already. If the lights are all going in a row, that's seek mode... step on the random switch to put it in random mode. Put the left most knob inabout the middle, and turn acouple of the other eight knobs to the left. There's a little notch in each knob so you can tell it's position, and an LED by each wah control that shows which is active and by it's brightness, the wah setting. Put the tiny switch in the MIDDLE position. That sets it to 8 steps. Strum a chord and let it hang, and listen to the tempo of the unit. Bob your head to the tempo, and strum again... If you want it to be a little faster turn the leftmost knob (speed) to the LEFT, and if you want it tobe a little slower turn itto the RIGHT.

If you find that the band is slipping out of time after you have thes peed set just right, turn the unit off and on again at the beginning of a measure, and it will start up in time again! This feature is onlyavailable on the Ooh-Wah II.

Basically, the ooh-wah is sort of a combination of a tremolo and a wah wah pedal. If you're familiar with seventies synths, it's exactly like an analog sequencer/random sample-and-hold controlling a mellow bandpass filter. You have a choice between 4, 6, or 8 steps/channels for your wah. The 6 step positions works well with 6/8 or 3/4 times ongs when in seek-mode, and you can control the total number of possible "channels" of wah with that switch in random mode. In seek-mode, the ooh-wah steps through from one wah setting to another and starts over after it gets to the end ofthe sequence. There's a total of 9 knobs, the leftmost being a speed control, and the other being wah settings, which get brighter when you turn them to the left. You can set up patterns which accentuate notes in arpeggiated chords at particular spots.
Or, you can set the thing to do a sort of tremolo echo in seek-mode, with the knobs set like this: 7:00, 5:00, 8:00, 5:00, 11:00, 5:00, 2:00, 5:00 (these are o'clock positions, not spinal tap 1-11). Then set the speed control for a happy tempo. Another fun setting is to put each knob at a different position and put the pedal in random mode with the random switch. Also, try putting all the knobsin a very narrow range in the middle of the wah sound (about 1 or 2:00) and set the speed pretty fast in random mode...fun burbling sound.

SPECS
Power Source: 9V dc battery
Controls:Speed (tempo), eight wah settings for sequencer, eight LED's to indicate which wah setting is in use and it's level, switch for 4, 6,or 8 total steps, and True bypass stomp switch.

Each pedal is hand painted and each circuit is hand assembled, with no two boxes quite alike. Enjoy!

Special note on Zvex products: Some items will not look exactly like the picture... Each Zvex product is hand crafted and custom painted. Each one is unique.