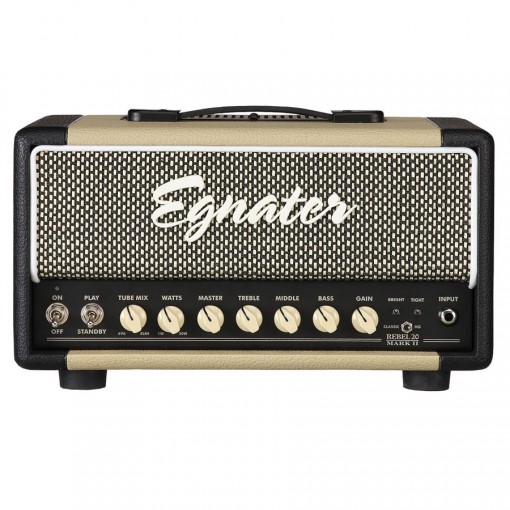 The new Rebel-20 MARK II still has the same features which made its predecessor such a huge success, including the now famous Tube Mix knob which allows you to blend a pair 6V6 and EL-84 power tubes. While many amp companies try to emulate this effect, only in the Rebel series are you able to actually blend “British” and ‘American” tube tone in real time. The variable Watts knob which varies the wattage from 1W to 20W, Egnater’s signature tone shaping TIGHT and BRIGHT switches, the wide-range gain control which takes you from sparkling clean to a ferocious roar and everything in between, as well as the great effects loop are still found on the REBEL-20 MARK II.

The REBEL-20 MARK II starts where the REBEL-20 left off and delivers substantially higher gain than its predecessor and includes a new CLASSIC/HG switch which selects between Classic Rebel-20 and the new higher gain structure. Under the hood you will find the new Elite Transformers with substantially greater headroom and industrial grade red FR4 glass epoxy circuit boards with beefed up copper traces to name just a few of the improvements.

Plug in to the REBEL-20 MARK II and hear what the hype is all about.

TUBE MIX lets you dial in the rich American tones of the 6V6 power tubes, the British-style bark and chime of the EL84s, or to blend them for an endless variety of sounds.

The scalable WATTS control takes the REBEL-20 MARK II anywhere from 1W to 20W, so you can dial in rich, responsive tube tone at any volume level. Vary the wattage from 1 to 20 and easily go from the studio to the stage.